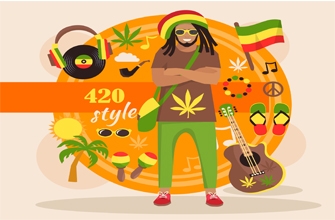 Nowadays the term 420 is getting more and more popular on the internet. For instance, you have 420 proof, 420 free, 420 hostel, 420 time, 420 blaze etc... I have been a real pot smoker all my life, but I never heard of this legend until 3 years back. I decided to book a trip to Jamaica on my one. From the thought that a real pot smoker should have visited Jamaica at least once in his life, I went to search the World Wide Web for a hostel where of course i could wake and bake. I was bombed with the number 420 and I did not understand anything about it.

I went on research and found out that this was a slang code for allowing smoking a joint. I became very excited and wanted to know more, so i visited loads of hotels/hostels online to see witch one will suit me the best. What a great concept is this! One hostel offered a free Jamaican joint at breakfast, another hostel offered every day at exactly 16.20 hours a free giant ' group joint ' to its hostel guests. A different hostel treated  its guests with a big ass bud the size of your forearm if they would stay several days. Isn't this amazing! I can now honestly say, after my great Jamaican experience, that just about all hostels in Jamaica are 420 free.

It's cool that 420, but why have they chosen for figures and not for the written word 420 (fourtwenty)? Look, if you're a real pot smoker or cannabis enthusiast, chances are you'll know what the term 420 means, though I didn't know this as an experienced user myself. 420 in English refers to a time 4:20 (16.20 hours). A group of rebellious Californian stoners who gave themselves the name of Waldo's, devised the tradition of getting together every day at 420 (16.20 hours) After school (San Rafael High School) to smoke many joints before going on an adventure to search for cannabis In the wild. After many quests, no cannabis plant has been found, but many of them has been smoked. This tradition has turned into a true phenomenon in which all California people came together to use cannabis. The tradition of getting together, at this time, to sit firmly and socialize has been maintained in all these years.

I also experienced this myself when I was young. I still remember the excitement in the good old days that i had as a teenager in the classroom, knowing that when school was out I secretly went to blaze with my friends at the agreed square or bench in the city or in the park. This was also often around 16.20 hours. This is exactly what 420 is all about; Come together to smoke a joint to socialize and laugh. That is what cannabis used to do with humans, and that is what cannabis still does with people until today.

The Hightimes magazine, founded in 1974 by Tom Forçade, decided to publish an article on the 420 hype in the  ́ 90. The news spread globally with the speed of light. 420 began to become a worldwide phenomenon among cannabis users. This hype of lifestyle began to transform globally from a subculture into a true cannabis culture. In the interest of honoring this emerging culture, a special day has been announced once a year, namely 20 April. 20 April is referred to In America as 4/20. On this day, many cannabis enthusiasts come together to be smoke cannabis or to demonstrate for the legality of marijuana.

420 EVENTS: GLOBAL PARTICIPATION IN THE GMM OR MMM OR GCM

The global Marijuana MARCH (GMM) also known as the Million Marijuana MARCH (MMM) and the global Cannabis MARCH (GCM) were created in 1999 in New York City. The Global Marijuana March is a feast that embraces the cannabis culture and has become a true lifestyle. Participants in this March are cannabis users, both medicinal and recreational users, who come together to celebrate the use of marijuana. Participants of this March believe that legalizing the personal use of marijuana would help in the fight against drug trafficking.

Cannabis use is becoming more and more widely accepted worldwide. Cannabis users are not necessarily criminals or sick, they are also ordinary people, like you and me, who make a productive contribution to society and simply want to enjoy and relax by smoking a joint after a hectic day at work or office. This movement spread far beyond the border. Today, nearly 500 cities around the world participate in marijuana marches/events. Some examples of these marijuana marches and/or events are: Ganja Day, Cannabis Liberation Day, Global Space Odyssey, J Day, Million Blunts March, World Cannabis Day and so on. All days when cannabis enthusiasts from all over the world come together.

There are so many stories around on the internet about what 420 would mean. Here are some examples that the Internet is full of, but which can be very easily defied: