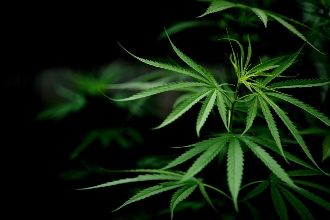 Ey, here we are again. After my first report: Outdoor cannabis breeding report part 1, now comes my second outdoor growing report. For the sake of convenience, I number the types / strains that I double in this report with # 1 and # 2. I also tagged my cannabis plants with these labels and stickers on the pots.

Just a quick reminder, my outdoor cultivation consisted of 7 plants, now there are 8 because a Dutch Hope has joined the family, so Hollands Hope # 2. I placed this cannabis seed in a coffee filter on May 8 and on May 10 there was a root of about 1-2 cm. The coffee filter method was therefore again successful. On May 10 I put the germinated seed in a 20L Air-Pot with Plagron Batmix and extra perlite. On May 16, the seedling surfaced. So now we have the following plants outside:

After Repotting my Cannabis plants

As you can read in the previous report, I have already repotted all plants on the Dutch Hope # 2. During and after repotting I used 100% Organic Rescue & Booster Spray from the brand BioTabs. I also gave a little extra root stimulator and kept a close eye on the cannabis plants and their growth. At the beginning I barely noticed any new growth, but despite the effort to reduce the stress, I think the plants had become a bit stressed by repotting. However, this is normal when a plant (or animal) comes to or in a different environment. After about 5 to 7 days, the growth just continued quickly. After the soil had subsided a bit, I again filled it up to the edge with some extra soil.

The title of this paragraph says it all, I had / have a small leaf problem with my outdoor plants, but this is nothing to worry about. For many outdoor growers and outdoor plants, it includes holes or discoloration in the leaves. If this happens, don't stress but try to find out the cause, Insects? Fungi? Feeding problems? It can really be anything. I first started to think and looked in my notes how much nutrition I gave the plants and when, so I found out that I gave the plants growth nutrition just before repotting in rich soil. So this may have been a bit too much. So now no growth nutrition my soil has been fertilized for 4-6 weeks. However, they still receive about 0.5 to 1ml Canna Rhizotonic (Root Stimulator). After this adjustment in the diet it went a bit better. Then I saw that I have a lot of ants here, which as long as they do not make a nest in your pots or under your cannabis plant are not such a problem, but the aphids they can bring and maintain!

Now I am lucky to have a hedge of conifers around the Cannabis plants. Aphids have an aversion to this because, just like conifers, this is a fir-like. So nature is very beautiful, it keeps itself in balance. I have decided to let nature take its course on my terrace as long as it does not harm my plants and harvest. I do use once a week, for prevention, the biological agent CannaCure (Spray) as an insect repellent and (extra) foliar food. This is a completely organic agent, which you mix with water and spray on, over and under your Cannabis plant (s) and mainly (in) spray the leaves. This Spray prevents insect eggs from hatching and allows the adult insects to stick, causing them to die. A very effective, nature-friendly product. Not unimportant you can use it in both the Vegetative and the Flowering phase, try to keep buds (as) dry (as possible). I also put a ring of painter's tape inside out around the trunks of the plants so that crawling insects stick to them when they want to go up or down the plant.

Topping and / or Fimming the Cannabis Plant

Now we arrive at one of the most used and most interesting pruning or cutting techniques in the Cannabis and cultivation world, namely Topping and / or Fimming the Cannabis plant so that it can take on a shape or structure desired by the grower and also to increase the yield. To explain how this works you should first know what "Apical Dominance" means. Sounds very difficult, it is very simple: In plants, the top of a plant is called the Apex, which in nature always wants to grow as far above the side branches as possible and allow the rest of the plant to grow, this has to do with hormones in the plant. This Apical dominance, means that your plant wants to have its top as large and high as possible, which can be at the expense of the lower (side) branches and buds. Now you guessed it, we are going to take that Apical Dominance or "Top Dominance" use the plant's ominance against itself, which will increase our yield. Buds or Fimming, are two methods that in principle, if done correctly and during the growth phase, can hardly go wrong, in the worst case you still get 1 bud instead of the desired result, which is doubling and sometimes even quadrupling of side branches and buds. So now the question is what is Toppen and what is FIM (men) your Cannabis plants?

Simply put, topping are shortening the top of the cannabis plant so that it produces more than 1 bud, hence the word topping, you remove the top of the plant completely. You can do this with sterile scissors, a sharp knife or (clean) fingers. If you top, there could be a doubling of your main top, so this is why growers use this method so often and much. Topping, however, like Fimmen is a High Stress Method that you ONLY apply in the growth or vegetative phase of the (Cannabis) plant. Topping or any HRT method is highly discouraged during the Flowering phase.

And what about the other possibility? Fim (men)? In principle, fimming is almost the same as topping. After all, it comes from "Fuck i Missed". So this method is not as precise as the Top method. The story goes that someone wanted to top, miss and in this way found out that the main tops not only doubled but even tripled or quadrupled. Fimming therefore has the same intended purpose, however, by not completely removing the top of the cannabis plant, but by cutting away 60-80% of the top part of the top, more head tops could emerge. As a result, just as with buds, there can be at least a doubling, but with Fimmen it can also happen that the main bud not only doubles but possibly also triples or even quadruples. Also Fimmen is an HRT method and is only done during the Vegetative phase of the plant. I myself have five of my plants trimmed on May 31. I shot these five: Monster Zkittlez # 1, Monster Zkittlez # 2, Early Skunk, Critical and Hollands Hope # 1. After the Fimming it took a while for the plants to recover, but after a few days I saw the top recover and even grow. After a week I already saw no damage and the plant has recovered and more than that. The Fimming has been very successful with all cannabis plants, they are starting to take on a more 'bush shape' or 'bush shape', and several head and side branches / buds have emerged.

Yes Bloom and Bloom! Both Sensi Skunk Autoflowers started to flower just after repotting. These Autoflowers are autoflowering and therefore do not depend on the change in sun hours. On / around May 19, the Autoflowers both flowered. These flower now visible for about a month. When plants bloom visibly they often do this internally for a week or 2, which is not visible to us, the growers. So I can actually say that I repotted the Autoflowers a little too late or should not have repotted them at all. Nevertheless, they still grow quickly and produce their buds. From May 19 I started to give Biocanna Flores and Biocanna Boost 1 to 2 ml / liter of each. The wind has unfortunately broken off the Sensi Autoflower # 2 a lower-lying bud carrying side branch, unfortunately nothing to do about it is nature. The rest of the plant looks healthy and I believe that a good harvest can really come off, because according to the seed supplier (Sensi Seeds) they still have about 3-5 weeks to (finish) flowering. The Autoflower # 1 is a bit bigger than Autoflower # 2, while they have the same genetics and growing conditions.

So far my second (outdoor) cultivation is going quite well, I am very satisfied with the result so far. Hollands Hope # 2 germinated well a few weeks earlier, the other plants also recovered well from repotting and from Fimming and they all grow very fast now. The Autoflowers cannabis plants are blooming about half way. All (Air) pots have been replenished to the brim with fresh soil after the soil has subsided a bit. My little plants from my previous report are now starting to become shrubs and I do not recognize them anymore and as long as the conditions are right they will grow very quickly. I can hardly wait for my next report and hopefully I can (almost) harvest Sensi Skunk Autoflowers. After those two, I'm going to grow two more Royal Queen Seeds Sweet Skunks Automatic in the same pots this year. So now and time for a nice Blow, hopefully you enjoyed and learned from my second report, until next time!

Do you want to start growing cannabis plants yourself? Here you will find the best seeds: 24High Seedshop