THE HISTORY OF THE RED LIGHT DISTRICT AMSTERDAM 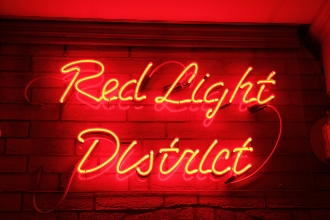 In this blog we take you on a journey back in time. We will discuss the origin of the Red Light District in Amsterdam. The Red Light District in Amsterdam is located in the oldest part of Amsterdam. The Oude Kerk (the Old Church) is the oldest building in this city and the Warmoesstraat is the oldest street in Amsterdam. Both date back to the 13th century. Until the year 1600, this area was full of churches and monasteries. That is of course different today. Despite this, it is still one of the oldest and the most famous neighborhoods in the Netherlands. It is also one of the most important tourist attractions in Amsterdam. The Red Light District Amsterdam is now world famous because of the many red-lit windows with prostitutes. In these windows the prostitutes wear sexy lingerie to try to "lure" their customers. Prostitution is one of the oldest professions in the world. In Amsterdam there are known cases of prostitution dating back to the 13th century. At that time Amsterdam consisted of only two rows of wooden houses with a canal in between and a small harbor nearby. That is exactly where the Central Station is now. The small street of a few houses, canal and harbor would become the beginning of the large and world famous Amsterdam! Of course this did not happen (directly) through prostitution, but through trading. This ultimately made Amsterdam what it has become today. Prostitution has grown with the rapid economic growth of the city. The prostitution district in Amsterdam is also called in Dutch "de Wallen" or "De Rosse Buurt". There are also numerous sex shops, sex clubs and couples' clubs in this area such as the erotic theater Casa Rosso, the Bananenbar, various coffee shops and of course the famous Hash Marihuana & Hemp Museum. Let's start with the history of the Red Light District Amsterdam.


The History of the Red Light District Amsterdam

Let's go back to the history and the origins of the Red Light District Amsterdam. As mentioned above, the area we now know as the Red Light District was once made up of many monasteries. However, this was the case until the year 1578. From that year on, there were a majority of Calvinist administrators who were in charge in Amsterdam because of the "Alteration". These began to give the Catholic monasteries other uses, such as orphanages or detention centers. From this moment and even a little earlier prostitution started in this area. In about the same area where prostitution is still found today. Since the 15th century, brothels and other prostitution venues have been established in the Red Light District and around. In response, Amsterdam decided to punish prostitution or make it possible, and those involved were often expelled from the city. Obviously, this was not sustainable for the municipality of Amsterdam, as prostitution, just like the flourishing trade, could no longer be stopped!

Despite this, the Red Light District Amsterdam was in a poorly maintained condition for a long time and this area started to lag behind the rest of Amsterdam. With that there was more and more street prostitution. So around the 1930s window prostitution started to take off. The police did not allow these prostitutes to lure their customers on the street and in the doorway. They told prostitutes to sit behind the window with the curtains ajar. That's how the "ladies of pleasure" started luring customers behind the windows. From the 1960s on, this prostitution increased enormously in the Red Light District Amsterdam. From this period on, prostitution was therefore tolerated. Until recently, around the 2000s and after, when our government decided that prostitution became a problem, prostitution had to be limited, tackled and perhaps even banned.

The latter is not an option, after all, it is one of the oldest professions in the world and it will always continue to exist, legal or illegal. Isn't it better for everyone if we ensure that work can be done safely and cleanly, for both the customer and the service provider? In addition, it can be assumed that people who live here legally choose these professions of their own accord. In this way, human suffering can be prevented and checks can be carried out better. The Red Light District in Amsterdam is almost as old as the city of Amsterdam itself. It is part of our history and our culture. We must cherish and maintain the ramparts. To understand the invaluable value for our history and culture even better, we will briefly tell you something about the most important and most controversial sights in the Red Light District Amsterdam. The Oude Kerk (The Old Church) is the oldest surviving (Protestantse) church in the Netherlands and now functions as a museum. Still a place of worship on Sundays and a haven for lovers of cultural heritage, art and music throughout the year.

Casa Rosso is a erotic theater and sex palace that established itself more than 50 years ago, in 1968, on the Oudezijds Achterburgwal. Casa Rosso quickly became known worldwide, just like the current owner Jan Otten. Jan Otten, who once started as a doorman in the Red Light District Amsterdam, is now known as the "King of the Red Light District". He has meant a lot to this neighborhood as a whole. In its theater and sex palace you can still enjoy from striptease acts to watching and admiring couples having sex. Nowadays the pink elephant with the green scarf (their logo), which is also depicted life-size on the theater itself, is an indispensable part of the Amsterdam street scene!

In the 1970s, Maarten Lamers opened a café-bar on the Oudezijds Achterburgwal Red Light District Amsterdam, where the drink was served by women in scarce clothing. For an additional fee these women also did all kinds of "sexy tricks", often bananas were used for this. However, owner Maarten Lamers did not have a liquor license for his business and, despite many attempts, was unable to obtain one. After another raid, the chief inspector of the police, probably accidentally, came up with the golden idea to give the alcohol for free in the private sphere and that no license would be required for this. The entrepreneur started a "religious community" and made people pay a "voluntary" contribution for drinks. However, after an inspection by two tax inspectors, it turned out that millions of guilders (old Dutch currency) were being converted and the owner could therefore no longer prove that his café-bar was not a commercial company. Maarten Lamers was charged with fraud and had to close the doors of his café-bar in 1988. He fled and concealed himself in a castle in France that he had previously bought and was not caught by the police until 1997. He eventually got a prison sentence of just a month, though. However, he also received a settlement of several million euros. About 20 years ago, the entrepreneur Jan Otten, the owner of Casa Rosso, also became the owner of the Bananenbar. He is also the one who came up with this name, the Banana Bar. The ladies still show the same erotic arts on the bar in sexy and erotic clothing. In the BananenBar you enjoy talented pole dancers and you can also get a lap dance. In short, a unique experience in one of the most exciting bars in Amsterdam Red Light District!

The Sex Palace Peep Show is the only (legal) peepshow in Amsterdam Red Light District and surroundings, which still exists. This is also thanks to Jan Otten, who also runs the Sex Palace Peepshow. A peep show is an exciting live sex show that can be viewed from booths. A maximum of 2 people are allowed per cabin. The actresses are changed every 10 minutes. Often several people watch one show at the same time, each from their own booth. A peep show is certainly worth a visit, because for only 2.00 euros per 2 minutes you can tick this unique and exciting experience off your bucket list. It is often also possible to get a private show, of course at a higher cost. In the private cabins you are still separated by a glass wall, but the visitor and actress can give each other instructions and there is 1 on 1 communication. The peep shows originated in the 1970s, more than 40 years ago. A true revolution at the time! Before the introduction of the internet, these places had their golden years. There were no fewer than 6 places where you could view peep shows in the Red Light District Amsterdam. Only one of them is left at the moment and therefore the very last! We therefore recommend that you visit The sex palece peepshow and enjoy something unique that has been part of the liberal culture in Amsterdam for decades.

This is the public toilet in the Red Light District Amsterdam! This one was also conceived and set up by Jan Otten. This public toilet is one where you must have been at least once in your life! So are you in the Red Light District Amsterdam and are you in dire need of help or would you like to freshen up after a long walk through the city? Then this public toilet is a real Red Light Experience! Once inside you are in a reflection of the red light district with its characteristic red light, windows and side alleys. Each toilet has its own unique interior, which gives your toilet visit an extra dimension. There is also a baby changing table available and the disabled have been well thought out. A visit to the toilet here costs 2.00 euros, but then you also have a clean and unique toilet experience, in the middle of the Red Light District of Amsterdam!

This is the cannabis museum in the middle of the Red Light District of Amsterdam. The museum was founded in 1985 by the entrepreneur and cannabis seed grower Ben Dronkers together with his friend Ed Rosenthal. Both also manage a hemp seed shop next to this museum. Since the museum opened, the collection has grown to more than 7000 collectibles! In 2008, the two millionth visitor entered the museum's doors here! In 2012, the museum also opened a second branch in Barcelona, ​​the Hash Marihuana & Hemp Museum Barcelona. The Hash Marihuana Hemp Museum in Amsterdam shows the visitor the history of (the use of) cannabis (hemp, hash and weed) over the centuries. In addition to the recreational use of the cannabis plant, it also highlights the role that cannabis has played in religions and the medicinal use of marijuana in the past and in the future. Part of the museum is the Hemp Gallery, which shows us everything about industrial hemp and how the plant used to be processed into clothing, rope, paper, canvas or fishing nets. The nutritious properties of hemp seed and the way in which hemp can now serve as a sustainable raw material for the construction sector, the car industry or the clothing industry are also extensively discussed in the museum.

The collection of this museum is very diverse. For example, a number of living cannabis plants are displayed in an indoor garden. This museum also provides all visitors with a brochure containing interesting information about the objects on display. The museum also recently published the book Marihuana Hemp, Plea for Man and Plants. In short, if you are in the Red Light District Amsterdam, this museum is definitely worth a visit! When you come from here, you can of course always visit one of the many characteristic coffeeshops in Amsterdam and the Red Light District.