WHAT IS A MYCELIUM NETWORK AND HOW DOES IT GROW? 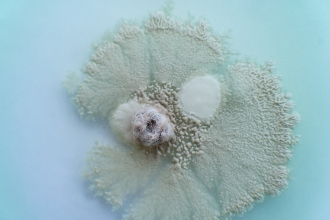 What is the mycelium network and how does it grow?

The world of magic mushrooms is a bit mysterious, but always fascinating. This is not only because of the influence they can have on you, but also because of their growth habit. Especially if you want to grow magic mushrooms, it is useful to know a little more about it. In mushroom cultivation you often come across the word mycelium. That is the network of hyphae from which the magic mushrooms originate. You can read more about that in this blog.


What is the mycelium?

Anyone who wants to grow mushrooms themselves will also have to deal with the mycelium. In the breeding tank you will find a breeding ground and that contains the mycelium. This is the network of fungal threads (also called hyphae) of the conscious mushroom you want to grow. This can arise from a single spore. In the wild, mycelia can form underground or in a nutrient medium such as a rotten tree trunk. The mycelium will normally continue to spread through long threads. The fruiting bodies grow above the ground from the mycelium. These are the mushrooms (or in your grow kit the magic mushroom, such as Golden Teacher or Mexican mushroom). For easy visualization, you can think of the mycelium as the roots of a plant and the mushroom as the fruit.


The task of the mycelium

The fungus reproduces in an asexual way through the mycelium. It also ensures the absorption of nutrients, so that the fungus can grow further. Fungi break down organic material, after which these small particles return to the soil. The mycelium also works together with all kinds of plants and trees, in a symbiosis. It filters the soil, so fungi help keep it healthy. Fungi themselves are also a source of food for insects and invertebrates. Fungi therefore have a very important function in nature. Also in your grow kit at home, the mycelium will absorb nutrients from the nutrient medium (the substrate). This allows your mushrooms to grow. Did you know that fungi can grow enormously? There is a very large fungus in Oregon in the United States. This grows under the Blue Mountains. Its mycelium occupies an area of ​​10 square kilometers. This makes this the largest organism on earth!


Growth of the mycelium

Only one spore has to fall into the soil and from there the mycelium can grow . It forms threads that branch out more and more. It is striking that it grows from a center. When the food in the center is gone, the mycelium there will disappear, causing the mushrooms to form a circle. That is the well-known witch circle.

Contamination with fungi or bacteria

You may be wondering what the difference is between the mycelium and the fungus. What you don't want is mold that can contaminate your grow kit. You can recognize an infection with fungus (or bacteria) by:

If you suffer from an infection in the mycelium, it can really ruin your mushroom culture. That is why it is also important to prevent this by working hygienically. As you could read earlier, a fungus can form from a single spore. Therefore, try to sterilize the environment and your tools well before you start working with your growkit. Also make sure you are clean yourself by taking a shower. Wear gloves, clean clothes and you could even wear a mouth mask.