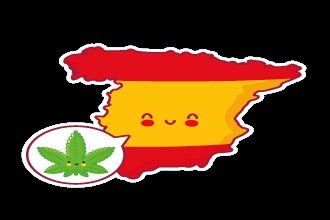 Cannabis Social Clubs Legalization without commercialization is it possible at all? It seems like a dream come true for many cannabis enthusiasts. We are going to talk about Cannabis Social Clubs in Spain. Can Spain deny the Netherlands as Cannabis King of Europe due it's coffeeshops? To be honest, I think that in many areas, Spain is well ahead of the Netherlands in terms of the view on Cannabis, but the quality of the weed and hash there is often excellent as well. How could it be otherwise when most seed suppliers, including even some Dutch seed companies, have their origin and / or do their business in Spain. Spain, like the Netherlands, has traditionally had a close love-hate relationship with cannabis.

In general, both countries are very lenient with regard to cannabis policies, however, there are still things happening that go against easing policies. Take Dutch coffee shop owner Johan van Laarhoven, for example, who has been betrayed by our own government and is wrongly treated as a criminal due to errors made by the ministry. To mention something more concretely related to today's topic; the police raided the well-known seed brand Dinafem and Kulu Trading in Barcelona and Loosdrecht, among others. This is shocking given that Dinafem had been around for over 20 years and was perhaps one of the largest in Europe. Less than two weeks after their Spanish colleagues, the Dutch police raided Kulu Trading in Loosdrecht with enormous force majeure, after which the mayor closed the building for six months. The entire stock has been included.

Incidentally, Kulu Trading had been around since 1974 and only supplied legal products to wholesalers, web shops and coffee shops. Many Dutch seed banks left for Spain during the period of the introduction of the grow-shop law in the Netherlands, but will now read the news of these raids with a shudder. Nevertheless, cannabis seed sales are legal in both Spain and the Netherlands. All seed suppliers and the approximately 1,000 grow shops in Spain are based on a report from the Supreme Court Prosecutor Fernando Sequeros Sazatornil on the sale of cannabis seeds, equipment and materials for their cultivation from 2003. He refers, among other things, to the position of seeds and browse the 1961 UN Single Convention. And as everyone knows, seeds certainly can't get you stoned. National policy in both countries often deviates far from the, in many cases, justifiably more flexible local policy. Fortunately, both countries also sometimes show that things CAN be done differently, such as Spain with the Cannabis Social Clubs that are active in the vicinity of Catalonia, mainly Barcelona. The Netherlands, the only place in the world with coffee shops, right? Our concept is still "unique" but there are many more places in the world where cannabis can be legally bought or consumed. In addition to the coffee shops in the Netherlands, you have Cannabis Dispensaries in many states of America and throughout Canada! And now many Cannabis Social Clubs in Spain. The growth of these clubs in Spain is booming, started with 40 Cannabis Social Clubs in 2010,  nowadays more than 700!

What are these Cannabis Social Clubs?

Unlike a Coffeeshop, a Cannabis Club is only for members. Officially to become a member of this association, you should basically have Spanish nationality and be at least 18 years old or old. However, it has turned out that you can also easily become a member of a Cannabis Club as a tourist. Cannabis Clubs are possible due to a loophole in Spanish law. Cannabis Clubs are private organizations and not (weed) shops. At a Cannabis Social Club you can register and grow your (own) Cannabis together with other members or sometimes alone. This true Cannabis revolution has started at a local level mainly in Northern Spain, especially Barcelona. The trend is now also beginning to extend to other Spanish areas. Each Cannabis Social Club has its own policy, however officially they are not allowed to sell only Cannabis. Members pay a contribution for, for example, maintenance of the club in exchange, members receive a place to grow or a certain amount of weed or hash.

The rise of Cannabis (Social Clubs) in Europe

Unfortunately, legislation in many areas of Europe has been or will be tightened up with regard to Cannabis, for example in our own Netherlands, where more and more coffee shops have to close unjustly. In contrast, Barcelona's Cannabis Clubs are fairly relaxed. To be honest, they are quite right, as some clubs already let in large groups of tourists and have more than 10,000 members! The Cannabis Social Clubs make huge profits, provide income, employment, relaxation, socialization and decriminalization and possibly even complete legalization of Cannabis in Spain. In addition, tourists come and spend lots of money that benefit the goverment with taxes. Just like in some states of America and throughout Canada Cannabis is increasing business! Fortunately, this not only provides financial gain, but can also pave the way for medical patients and a whole new, more positive view of society on Cannabis. Fortunately, just like in the USA, European politicians are steadily changing their position and ideas about cannabis one by one, with Spain happy to lead the way. Take Barcelona's first female mayor, Ada Colau, who recently proposed regulations to keep cannabis clubs open and created exceptions for those who should have closed. Barcelona a New Amsterdam? The rest of Northern Spain and even other areas have already realized that big money is being made in Catalonia and hordes of tourists are attracting them. One by one Cannabis Social Clubs are also starting to emerge there. There are even Cannabis Social Clubs that have online entries to experience what it's like (there).

Unfortunately, this relaxed attitude towards cannabis has made Spanish authorities more wary. After all, cannabis is still illegal in Spain. There are still conservative groups trying to oppose the Cannabis easing. While justice and the police are looking for a solution, the Cannabis Club Scene in Barcelona and the surrounding area continues quietly. After all, they know that the people are behind them. With more than 165,000 members in Barcelona alone and still growing. There is also a great alliance between the members, the clubs, pro cannabis politicians and the (cannabis) industry. In short, people feel connected to ensure that these beloved Cannabis clubs do not close their doors and have a good future so that everyone can consume their Cannabis responsibly, without risks and at their discretion. We wish these Social Cannabis Clubs the best of luck in their fight for legalization and the right to grow, own and consume Cannabis in any responsible way! Things are looking good in Spain so far so let's hope the Cannabis Social clubs remain strong and show the world that cannabis can be enjoyed responsibly!